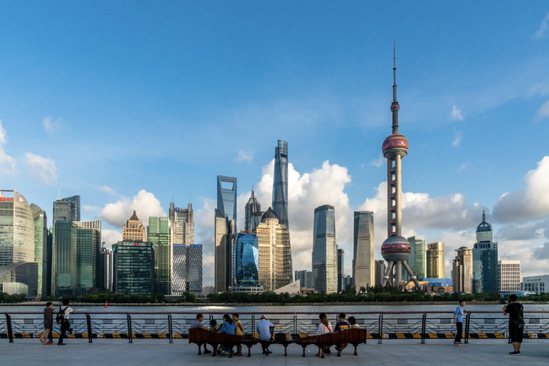 Lujiazui, the financial center in Shanghai, forms a perfect backdrop to the Bund area. [Photo by Wang Gang/For China Daily]

hanghai has set a GDP growth target of above 5.5 percent for 2023 and experts say the fulfillment of this achievable goal will support China's sustainable development in the long term.

Mayor Gong Zheng announced the goal on Wednesday while delivering the municipal government work report at the ongoing first session of the 16th Shanghai Municipal People's Congress, the city's legislature. He stressed that Shanghai will continue to pursue high-quality development and further deepen opening-up, making the city the pioneer of Chinese-style modernization.

There are opportunities and challenges lying ahead in the realization of this target, said Sun Lijian, director of the Financial Research Center at Fudan University.

Sun said 5.5 percent is a comparatively high figure considering Shanghai's economic scale, but the city's high development standards and its economic fundamentals indicate such a goal is achievable.

In the report, Gong noted that Shanghai's GDP surpassed 4 trillion yuan ($590.7 billion) in 2022, the second consecutive year it crossed the mark, and its per capita GDP reached 178,000 yuan.

Chen Jining, secretary of the CPC Shanghai Municipal Committee, participates in a group meeting during the ongoing first session of the 16th Shanghai Municipal People’s Congress on Wednesday. [Photo by Chen Zhengbao/chinadaily.com.cn]

The mayor listed 10 key tasks for the year ahead including the implementation of major national strategies, the enhancement of the city's education system, technology and talent pool, expanding and stabilizing demand, promoting digital transformation, and supporting green development and low-carbon transition.

As the pioneer of Chinese-style modernization, Shanghai is benchmarked against other cities to continue its experiments in opening-up, including turning Pudong into a pioneer of socialist modernization, Gong said.

Shanghai will focus on becoming a leading international center in terms of the economy, finance, trade, shipping and technological innovation. The city will also look to hone its four major functions — allocating global resources, initiating technological innovation, leading development of high-end industries and being a hub of opening-up.

In the report, digitalization was highlighted, particularly in the fields of artificial intelligence, electronic information, advanced materials, the metaverse and smart business.

According to Gong, the city's R&D spending intensity, or the expenditure on R&D as a percentage of its GDP, is projected to reach about 4.3 percent this year. In the coming five years, it aims to raise the proportion of the digital economy in the city's overall GDP to 18 percent.

With the metaverse industry being one of Shanghai's newly identified priority sectors, young startups, like us, have the opportunity to compete with global counterparts, Liu Wei, a deputy to the Shanghai Municipal People's Congress, who is also the founder and president of Mihoyo Technology (Shanghai), told local news portal ThePaper.cn.

Zuo Xuejin, a research professor at the Shanghai Academy of Social Sciences, said, As the nation's financial hub, Shanghai should take the responsibility to realize stable and high-quality economic development.

The realization of the city's annual GDP growth target needs the expansion of consumption, and that requires residents' steady income growth and confidence toward the future outlook, Zuo said.

Other major economic development targets were announced in the report. They include ensuring that the urban unemployment rate stays below 5 percent, having Shanghai's per-capita disposable income grow at a similar pace as the city's economic growth, containing consumer price rises at around 3 percent and setting aside 3 percent of GDP for environmental protection.

• Setting a GDP growth target of above 5.5 percent and aiming to grow its local budget by 5.5 percent.

• Containing the consumer price rise at around 3 percent and setting aside 3 percent of the GDP for environment protection expenditure.

• Maintaining the urban unemployment rate below 5 percent and adding more than 550,000 new posts.

• Adding a total of 5,000 beds for elderly care and 75,000 units of government subsidized rental housing.

If you have any problems with this article, please contact us at app@chinadaily.com.cn and we'll immediately get back to you.